The internationally acclaimed composer, songwriter and singer Salvatore Adamo, with 100 million record sales worldwide, appeared at the Athens Concert Hall (Megaron) at a single concert on October 7, 2009. The event was under the auspices of the Ministries of Culture and Foreign Affairs and the Municipality of Athens . All proceeds will go to achieve the Foundation’s objectives. On 6 October, the President of the Foundation Mrs. Aspasia Leventis organized a dinner at the Athenaeum Intercontinental Hotel to honor the artist and Goodwill Ambassador of the Foundation. During the event they were honored with commemorative plaques Adamo and Dr. Stavros Georgiannos for their contribution to the Foundation. 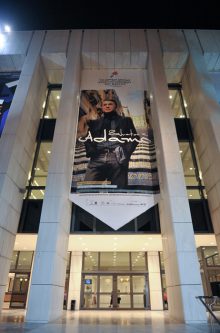 During the concert presented the world premiere song “Je t ‘aime de plus en plus fort” (I love you harder and harder), “an ode to life,” he wrote especially for the Foundation influenced by Sirtaki.

All proceeds will go towards achieving the objectives of BREAST CANCER ACTION FUND.