On 28 September, actress Jane Birkin, official guest of the BREAST CANCER ACTION FUND, presented an avant-premiere of her autobiographic film “Boxes” in the context of the 13th International Film Festival “Opening Nights”. An official dinner was then thrown by the President of the BCA Fund Mrs. Aspasia Leventis at the Intercontinental Hotel, where Jane Birkin, BCA Fund Goodwill Ambassador, performed her hits.

The famous actress and singer Jane Birkin was born the 14th of December 1946 in London. She emerged in the swinging ‘60s in London, starring as one of the models in the controversial film Blowup in 1966. She was married from 1965 until 1968 to John Barry, the English composer who wrote the musical score to the James Bond movies. Their daughter, the photographer Kate Barry, was born in 1968. In 1968, Birkin went to France to audition for the lead female role in Slogan. She had a very passionate and creative relationship with her mentor Serge Gainsbourg. They met on the set of Slogan and married in 1968. Her own musical career has been largely based on the songs written for her or about her by the late French pop icon Serge Gainsbourg. In 1969, she and Serge Gainsbourg released the song “Je t’aime… moi non plus” (“I love you… me neither”), written by Gainsbourg. They separated in 1980. Their daughter is actress Charlotte Gainsbourg. In 1973, she appeared in the film Don Juan and in 1975, in Gainsbourg’s first film, also titled Je t’aime… moi non plus. Birkin has starred in the Agatha Christie films Death on the Nile and Evil under the sun (1978). In 1982 she gave birth to her third daughter, Lou Doillon, from her relationship with the director Jacques Doillon. She starred in two films by Jacques Doillon, La fille prodigue and La pirate (1984, nominated for a Cesar Award). Jacques Rivette collaborated with her for Love on the ground (1983) and La belle noiseuse (1991, nominated Cesars best supporting actress). Additionally, she appeared in Merchant Ivory’s A soldier’s daughter never cries (1998) and Merci docteur Rey (2002). In 2006, she played Elektra, directed by Philippe Calvario in France.

Jane Birkin’s humanitarian interests led her to work with Amnesty International, on immigrant welfare and AIDS issues. She has been awarded an OBE for her services to acting, as well as the Ordre National du Merite in France.

She is noted as being the inspiration for fashion house Hermes’ popular Birkin Bag after the actress was seen struggling with several bags while boarding an airplane. 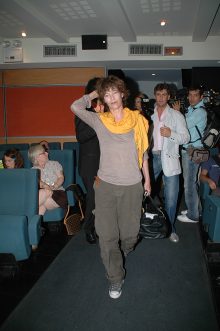