On December 10, 2010 our favorite performer, Eleftheria Arvanitaki, appeared in the crowded Athens Concert Hall (Megaron), with the Contemporary Music Orchestra of ERT, for a dreamy night, as the Fund’s guest. A musical program especially orchestrated for the specific philanthropic evening was presented and riveted the audience, as they journeyed to unique places, rich in sounds and images. The concert was honored with the presence of His Beautitude, the Archbishop of Athens and All Greece, Mr. Hieronymos. Due to high demand and the selling-out of tickets for the first night, a second concert was given on December 11 with the same enormous success. All proceeds will go to benefit the BCA Fund.

Eleftheria Arvanitaki is one of the top, modern-day Greek performers. She has a steady relationship with the nation’s traditional music, to say the least, which she combines with modern, western rhythms and sounds. Her characteristic voice, noted by its unique sensitivity, has been connected to many of the foremost admired and loved songs in Greece and her riveting stage presence is ethereal and dynamic and takes her audience on a journey through unique musical worlds, rich in sounds and images.

Her interpretive range is wide and that is reflected in her discography, in her collaboration with important Greek and foreign composers (Dimitris Papadimitriou, Ara Dinkjian, Nikos Xidakis, Teofilo Chantre, Dulce Pontes etc). Her songs’ verses have been written by important Greek verse writers (Lina Nikolakopoulou etc) and poets (Odysseus Elytis, Sapfo, Michalis Ganas etc). In Greece, she has released ten (10) personal albums, four (4) live recording albums and two (2) collections, which cumulatively have sold over 950,000 albums; all her albums have gone gold and platinum.

Since 1998, when her collection “Eleftheria Arvanitaki – The very best of 1989 – 1998” was released from Verve, all her albums have been released by the same company in Europe and the rest of the world. Also, her albums have been released in special editions in Spain, a country with which Eleftheria Arvanitaki has a special relationship: she has been touring there regularly since 1998 and all her performances are sold out. Her last personal album “Mirame” is an meeting – collaboration with the famous Spanish composer and producer, two-time Grammy award winner, Javier Linnon. Another collaboration that stands out is with the internationally acclaimed American composer and Oscar winner, Philip Glass, for his work “Orion”, which was presented in a world premiere at Herodion Theatre in June of 2004, within the framework of the Athens Olympic Games(2004), and continued its journey to Italy, France, England, the USA, Mexico and Australia. 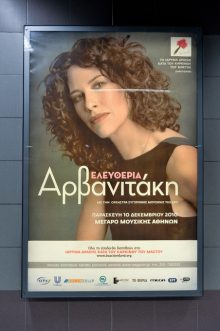 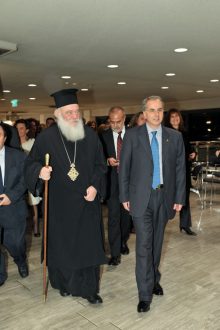 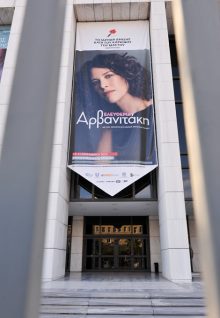