On September 7th, 2010, in a crowded Herodus Atticus Odeon, on a dreamy night, appeared the world renowed tenor, Andrea Bocelli, invited by the BCA Fund, of which he is a Goodwill Ambassador. In the beginning of the concert, a never-before-heard song was presented; a song written especially for the BCA Fund, by the composer of Andrea Bocelli’s biggest hits, Pierpaolo Guerrini, titled, “For a New Sun.”
The concert was honoured by the presence of the President of the Hellenic Republic, Mr. Karolos Papoulias, Prime Minister George A. Papandreou and His Beautitude, the Archbishop of Athens and All Greece, Mr. Hieronymos. All proceeds will go to benefit the BCA Fund.
On September 6th, the President of the BCA Fund, Mrs. Aspasia Leventis, hosted a dinner at the Ecali Club, in honour of the legendary artist and Goodwill Ambassador of the BCA Fund. During the event, Andrea Bocelli was honoured with a commemorative plaque in recognition of his continuous and profound commitment as a means to promote the ideals and principles embodied in the  BCA Fund. Oncology and Vascular surgeon, Dr. Stavros Georgiannos, presented new data regarding breast cancer.
Greetings from Andrea Bocelli

“If God would have a singing voice, He would sound a lot like Andrea Bocelli,” is Celine Dion’s well-known quote about the celebrated artist. The global recognition of his voice’s quality has placed him amongst the legends in the pantheon of music, having the highest international record sales (over 70 million) and his own Star on “Hollywood’s Walk of Fame”.

At Last, a Legend

At last, a legend for the new millennium. A legend in the Homeric sense of a myth, the “word that speaks” which has flowered here through song: like Caruso, Gigli, Del Monaco, Corelli… A legend (of Andrea Bocelli’s stature) is not created by design: the most astute marketing would never be able to produce such a result. It is simply that people “recognized” him and voted for him. And so it happened, in an apparently equal context (a singing competition, the Sanremo festival in 1994) and yet a most perfect one, because the infancy of a legend follows a course which breaks with tradition. From then on the tone of his voice has brought tenderness to the world and his fame has increased exponentially. “If God would have a singing voice, He would sound a lot like Andrea Bocelli” Celine Dion’s famous comment is a clear, unadorned testament to the artist’s legendary status as well as the perception of a gift… That voice, that simultaneously has melancholic and radiant colour, an unrivalled vocal interpretation of the emotions of a lover or a father, a matchless expression of earthly desire or heavenly love, with 70 million record sales to testify to it.

The Responsibility of Talent

“I don’t think one decides to become a singer, It is decided for you by the reactions of the people around you”. Andrea Bocelli had to reckon with a double gift, both elements of which are completely absorbing. The first aspect is a timbre which is as recognizable as a signature, full and powerful, with a versatility ranging from the Belcanto to the furore of Verismo, from the sacred repertoire to the popular ballads. The second gift is a more delicate one: life’s journey led Andrea Bocelli in adolescence to a different ability which deprived him of sight. This was truly a privation which increased the flow of an extraordinary and unique sensibility which transforms and transcends boundaries, causing him to excel in his interpretation of lyrics, in his perception of the subtleties of musical expression.

An Old Fashioned Training of a Modern Tenor

Tuscan, like Puccini and Mascagni, Andrea Bocelli was born on 22nd September 1958 and grew up on the family farm in Lajatico. He started studying the piano from the age of six years old. Later his musical passion would extend to the flute and the saxophone but it was in his voice that Andrea discovered the ideal instrument, and this was the beginning of the formative process which would produce Bocelli, the star, “a modern but old fashioned tenor” (as he likes to describe himself).  In 1970 he enjoyed his first success in a singing competition, performing “O sole mio”. After studying singing with Luciano Bettarini, Bocelli approached Franco Corelli. In order to pay for singing lessons, Andrea would play the piano in the local bars and, in the meantime, he continued to develop his interest in the humanities and graduated in Law. In the same period that saw him take off in the world of pop, Andrea was presented with an opportunity to make his debut on the operatic stage in 1994 in Verdi’s “Macbeth”. That Christmas he was invited to sing the “Adeste Fideles” in St Peter’s Basilica before the Pope. This was the start of a meteoric rise.
Con Te Partirò…

There is something miraculous about the parallel track along which the tenor Andrea Bocelli’s career developed. In 1996 the melody of the song “Con te Partirò” (and later its arrangement as a duet with Sarah Brightman with the title “Time to say Goodbye”) was heard in every corner of the world. The Bocelli phenomenon was being talked about everywhere, an artist whose explosion into the recording world – with an album entitled “Romanza” – was breaking all records. At the same time Andrea embarked on his operatic adventure, with a careful management of his voice. In 1998 he met Zubin Mehta and this led to the beginning of a successful collaboration between them. In 1999 Andrea performed at the Arena in Verona for the first time. In October he made his debut in the United States in Massenet’s “Werther”. At the same time his album “Sogno” was released, which included Andrea’s duet with Céline Dion of “The Prayer”. From this point on the Bocelli legend, supported by huge record sales, was unstoppable. His concerts would find the most celebrated directors on the podium such as Lorin Maazel, Seiji Ozawa, Valery Gergev, Zubin Mehta and Myun Whun Chung.

A Voice for the New Millennium

His first “classical” recording dates back to 1997 and was entitled “Viaggio Italiano”. In 1998 saw the release of “Aria” – The Opera Album. The dawn of the new millennium, was marked by the release of a cd dedicated to “Sacred Arias” conducted by Mο Chung. With this homage to Christianity Bocelli earned a place in the Guinness Book of World Records by occupying the first, second and third place in the American classical music charts. The year 2000 marked a new milestone in Andrea Bocelli’s recording career:  Puccini’s “La Bohème”, with Zubin Mehta conducting. Still under Mehta’s baton, the start of the millennium also celebrated the release of the “Verdi”  album. In 2001 it was the turn of Verdi’s “Requiem”, a recording with a formidable cast conducted by Valery Gergiev. In the autumn of 2002 Andrea Bocelli combined his energies with those of Lorin Maazel, with whom he undertook a very special recording project: “Sentimento”, an enormous success. In May 2003 Andrea sang the role of Mario in his album of Puccini’s “Tosca” under the direction of Zubin Mehta. In spring 2004 Bocelli released “Il Trovatore” which had been recorded in 2001. Bocelli sang Werther which was released onto the market in spring 2005. The following year his repertoire of operatic recordings was enriched by Leoncavallo’s Pagliacci and Mascagni’s “Cavalleria Rusticana”. His more recent projects include “Andrea Chénier” by Giordano and finally Bizet’s “Carmen”, directed by Myung Whun Chung. For his concerts Bocelli conquered the most lauded strongholds of the classical music world such as the Wiener Staatsoper.

In 2008, while his new album “Incanto” was a sell-out success, Andrea performed in “Carmen” in Rome and then “La Petite Messe Solennelle” in the United States, directed by Placido Domingo. He appeared as Turiddu in the “Cavalleria Rusticana” on the prestigious stage of the Deutsche Opera in Berlin and then flew to South America where he performed to an audience of more than 110,000 in Saο Paolo, Brazil. In 2009 Bocelli made his triumphant debut at Carnegie Hall in New York in a triple concert where he performed “Sacred Arias” and lieder.
As many of the legendary voices of the past such as Caruso and Sinatra have done before him, Andrea Bocelli too celebrates the Christmas tradition. His new album “My Christmas” shot to success in no time. Released on 3rd November 2009 in the USA, it went straight into the charts at number three and reached second place where it remained for six consecutive weeks.  Achieving sales of more than 4 million, it became the 5th top selling album in the world in 2009. Furthermore, in November 2009 a short film entitled “Omaggio a Roma” (Ode to Rome), telling the story of the Eternal City, was made by Franco Zeffirelli, under whose direction are the acclaimed tenor Andrea Bocelli and the beautiful actress Monica Bellucci. The two narrators are dressed as Mario e Tosca, the leading characters of Giacomo Puccini’s opera. The project was the idea of Vice Major of Rome and it is destined to become the city’s official “business card” at the most important international film festivals and to present the city to tour operators above all during international tourism fairs. Following in the tradition of prestigious FIFA performances by Luciano Pavarotti, Placido Domingo and José Carreras, tenors and soccer have a long history. On July 9th 2010, as a keen football fan, the world renowned tenor and multiple World Music Award winner performed at “The Crand Finale” of Africa’s Football World Cup (2010 FIFA World Cup) concert at the Coca Cola Dome in Johannesburg. From March 2010 another Star shines on Hollywood’s Walk of Fame dedicated to our Tuscan tenor and Breast Cancer Action Fund Goodwill Ambassador, one of a very few Italians to figure in this prestigious firmament. 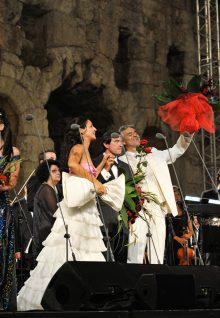 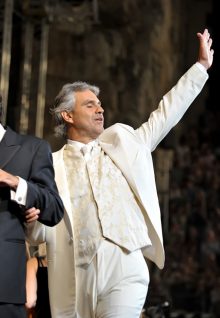 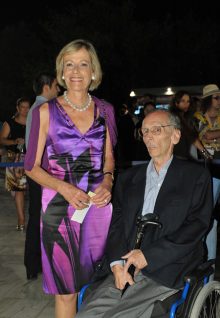 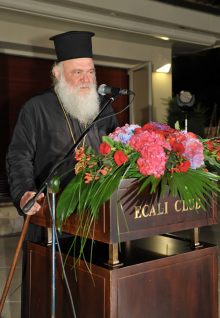 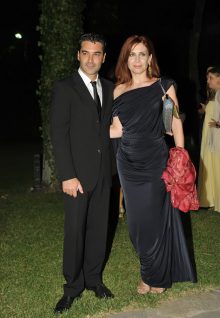 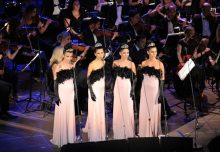 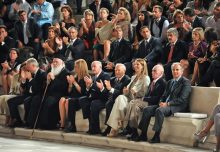 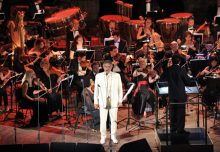 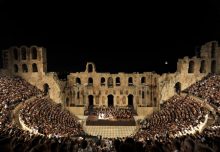 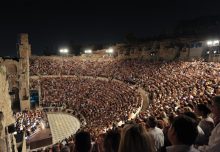 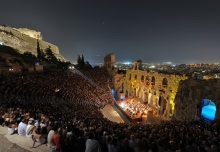 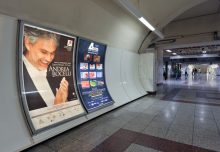 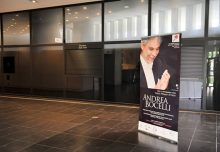 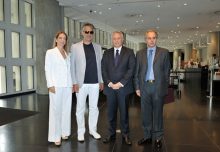 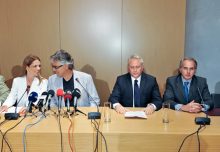 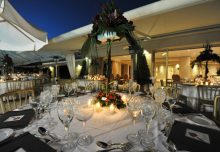 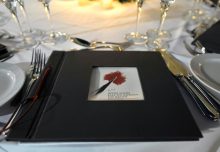 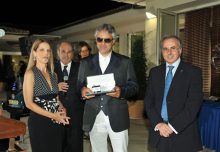 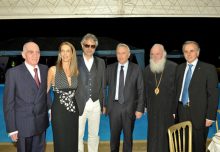 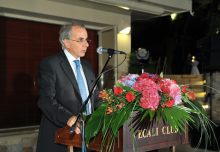 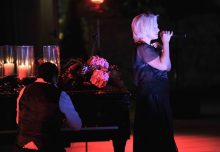 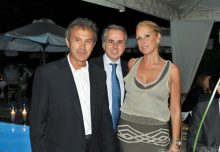 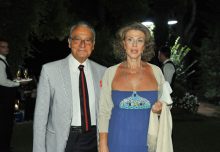 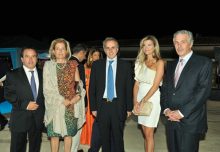