Zolotas house of jewels created specifically for the BREAST CANCER ACTION FUND  the 2010 Charm “The Herodian Ten”, aiming to promote the ideals and principles embodied in the BCA Fund.

Zolotas house of jewels has been writing history in the Decorative Arts since 1895. In Ancient Greece during the classical period, in the region of Attica, was developed a counting system named acrophonic in which the symbol “Δ” corresponded to the number ten. The complete description of that system was given by Herod (170-240 BC). Zolotas inspired by this symbol created the 2010 charms “The Herodian Ten”. Pendants come in silver gold plated, gold and gold with diamonds.

A share of the charm sales’ proceeds will be donated to the BCA Fund. 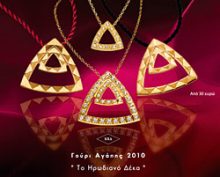